I'm thrilled to be participating in 60 Days to 60 Years- a blog series highlighting each year as we count down to Disneyland's 60th anniversary.

1968 was an important year for me- it was the year I was born. I did not visit Disneyland in 1968, but I've long been interested in what special places were like during that year.

A while back, I learned about the pictorial souvenir and guide books that used to be issued each year. Found in gift shops on property, they were a great keepsake to commemorate a visit to the park. It's hard for us today to imagine a time when not everyone had unlimited photographic powers at their fingertips- but back when cameras and photos were not as prevalent as they are now, these souvenirs offered many families a great option for capturing the sites and experiences of their visits.

One of the things I find interesting about these pictorials is the candidness of many of the photos. Today, promotional material put out by the company is meticulously crafted- photos are staged, the people are models with a careful balance of demographics, and everything is just so. Outfits are coordinated, and everyone is smiling. When I look through photos in the old guidebooks, I get a much "realer" sense of that slice of life. Few photos seem staged, candid shots abound, and we get a more honest feel for the environment.

With that, I share some photos and highlights from the 1968 version of the Disneyland Pictorial Souvenir and Guide: 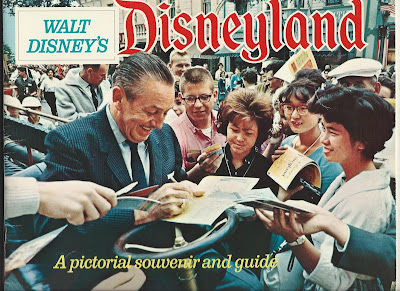 The cover! While this book was published for 1968, this famous photo
on the cover was taken a few years earlier. 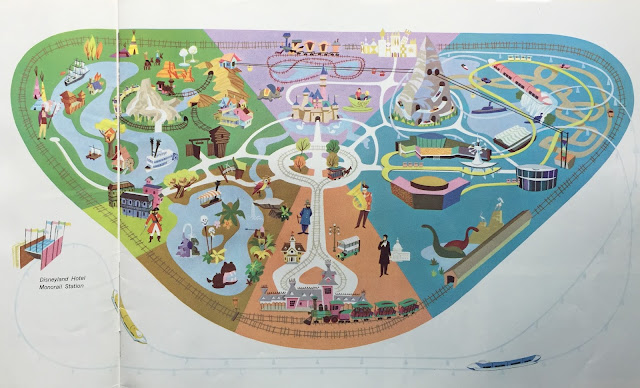 Ahhh, maps! I have a thing for maps. I'm drawn to them. I especially love the retro look of some of the maps in the souvenir books- and this one is no exception. Simple, stylized, and meant to give a broad picture rather than a detailed road map. I could look at a map like this endlessly.

Following the map, the pictorial goes on to highlight each land, with photos, and descriptions of the highlights in each area. 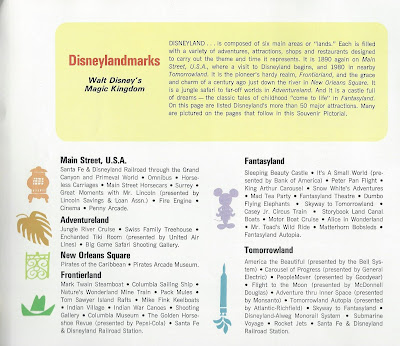 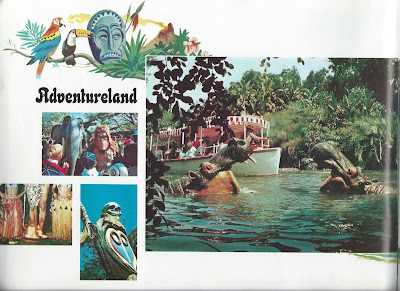 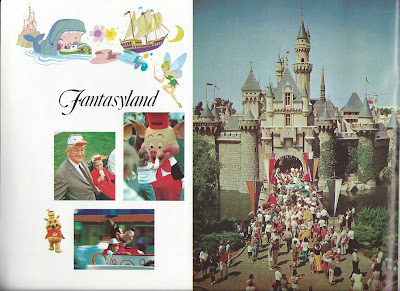 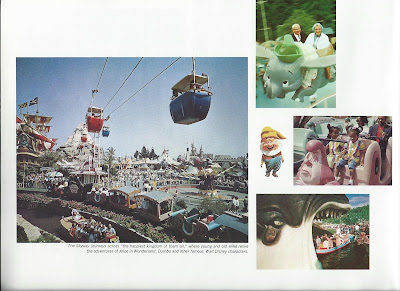 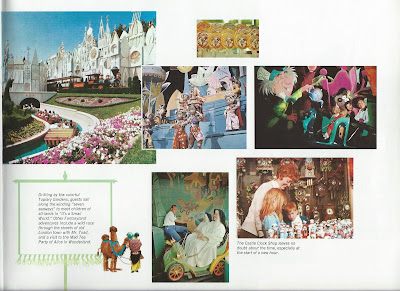 The page above features what just may be the greatest photo ever- two nuns about to embark on Mr. Toad's Wild Ride (a journey made more ironic when you know where the attraction brings them in the end)! 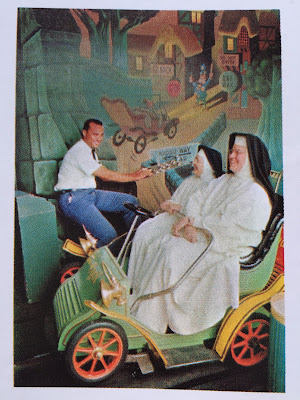 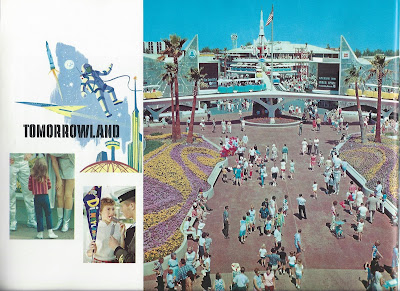 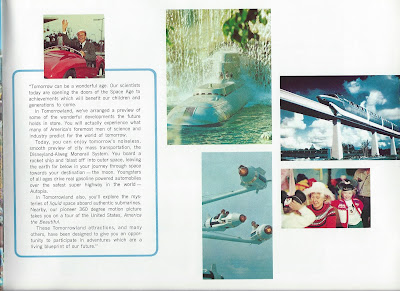 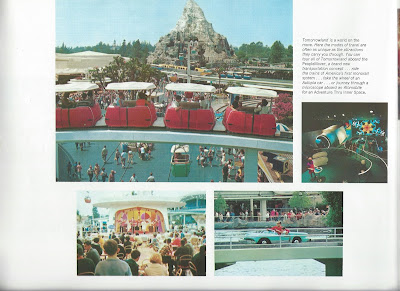 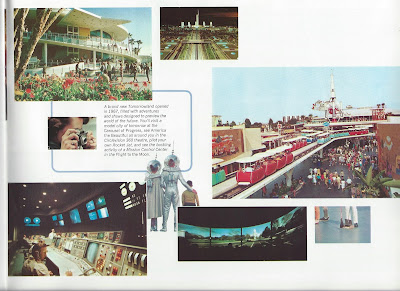 With limited space in the pictorial, the photo in the lower right (enlarged below) is an interesting choice for inclusion. I guess they were really pushing the cleanliness idea... 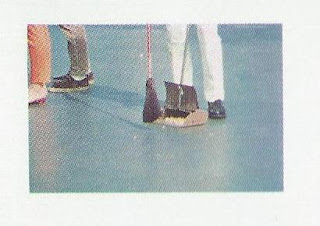 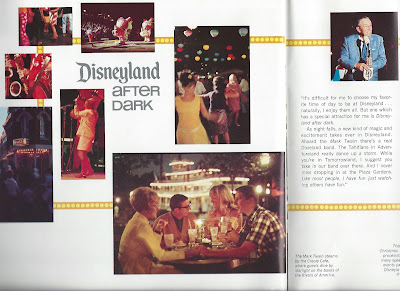 Walt's quote about Disneyland After Dark:
"It's difficult for me to choose my favorite time of day to be at Disneyland... naturally, I enjoy them all. But one which has a special attraction for me is Disneyland After Dark. As night falls, a new kind of magic and excitement takes over in Disneyland. Aboard the Mark Twain there's a real Dixieland Band. The Tahitians in Adventureland really dance up a storm. While you're in Tomorrowland, I suggest you take in our band over there. And I never miss dropping in at the Plaza Gardens. Like most people, I have fun just watching others have fun." 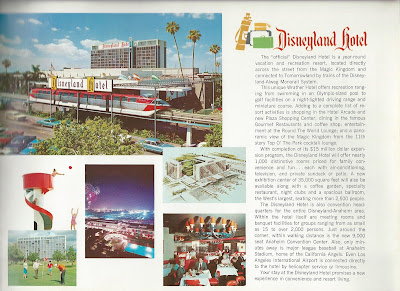 Towards the end of the guidebook, the pages on Disneyland Hotel and "Service a la Disneyland" advertise the then-state-of-the-art onsite hotel, as well as many of the sponsors found throughout the attractions, shops, and dining locations. 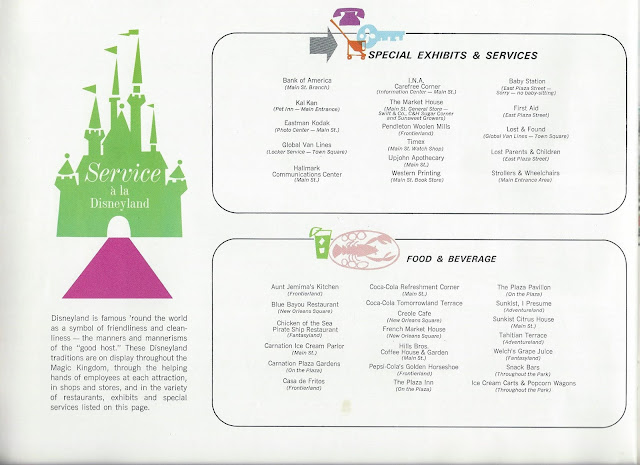 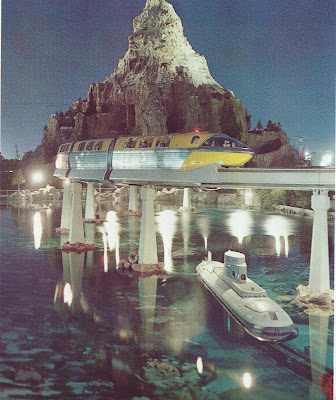 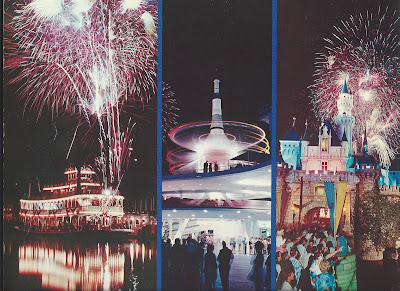 Are you interested in seeing a Souvenir Pictorial and Guidebook from a special year? They are widely available through online resellers, and they're usually fairly affordable. These special books give us a fantastic glimpse of what the park was like at various points through its history.


Thanks to DidiMarie (@Distherapy) and Gayle T (@Disneygals)  for hosting 60 Days to 60 Years! make sure to visit all the other stops on this sixty year journey...

Email ThisBlogThis!Share to TwitterShare to FacebookShare to Pinterest
Labels: Disneyland