Disney Magic: Serendipity with a CM

One of the most magical moments we've had at Walt Disney World was an unexpected and touching moment of serendipity with a Cast Member.

During our last family visit, I wanted to get a silhouette done of my daughter. I had seen pictures of these amazing artists using small scissors to create likenesses of people in the Magic Kingdom, and it was on my must-do list. We had planned on doing this at the end of our trip, so we wouldn't have to store it and keep it safe throughout our stay. For some reason, on our first day in the Magic Kingdom, something told me to head right to the silhouette artist.

I approached the CM, whose name was Jan, and asked if we could have a silhouette done. She looked up from the pad she was sketching on. She set down her sketches, then noticed my daughter's birthday button. "Is that her name?", she asked me. "Her real name?"

I get this question pretty often, because my daughter has an unusual name. I assured her that it was indeed her name. Jan smiled, paused for a moment, and then told my daughter to take a seat. 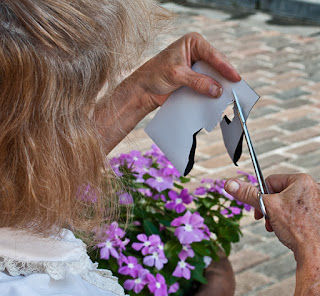 She worked her magic with scissors and black paper, and in no time at all, we had a beautiful silhouette.

Before we left the silhouette stand, Jan said she needed to share something with me. She explained that she had a beloved cat who had lived with her for many, many years. The cat had recently passed away, and on this particular day, Jan was really missing her. She said the cat had been on her mind all morning, so she was drawing pictures of her. This is what she had been doing when we walked up to her stand. As she picked up the sketchpad and showed it to me, she told me that we had made her day. I wasn't sure what she meant at first- but as I looked down, I saw that across the page were various drawings of a beautiful cat, along with scrolling letters, spelling out her cat's name...Pepper. The same name as my daughter... 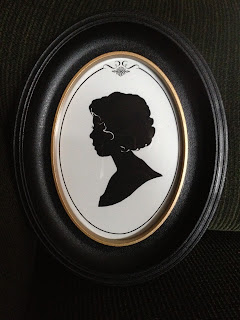 This keepsake silhouette not only represents a moment in time from my daughter's life, but also serves as a reminder of the magical connections we often find in unexpected places.

Have you ever had a special or unexpected encounter with a Cast Member? Tell us about it in the comments...
Posted by KJ @ PlustheMagic at 10:32 PM